THLN’s continued goal is to establish basic standards of shelter and care for restrained dogs across Texas whether that’s through legislation impacting the whole state or through local ordinances impacting cities and small communities. From now and into the next Legislative Session in 2021, THLN will focus its efforts on asking local governments across Texas to follow the examples set by the cities of Taylor and Round Rock in passing ordinances to protect dogs in their jurisdiction. Such ordinances are a powerful tool for local communities to leverage in addressing animal suffering.

For example, Taylor’s ordinance, which was approved unanimously by the city council, demonstrates the city’s dedication to protecting animals, even while Texas state law currently does not. The ordinance will take effect on October 9 of this year and bans the use of heavy chains, requires freedom of movement, and protects dogs from extreme weather while left outside—a must in our increasingly hot Texas climate. All dog owners in city limits are required to comply and will be given a citation if they do not. 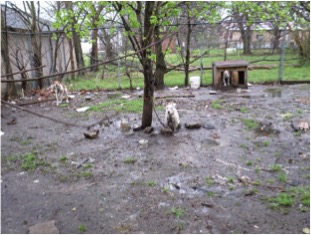 Unfortunately, hundreds of dogs in other Texas cities are still restrained outside with lack of access to basic shelter and care, including essentials such as water. In some cases, extremely heavy or extremely short chains prevent them from moving around, or worse yet, lifting their heads off of the ground. All dogs deserve to have basic shelter and care when outside, no matter where in Texas they are. 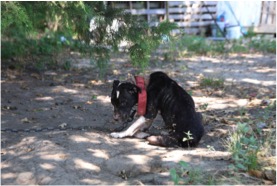 Although Texas has not yet passed comprehensive, enforceable state laws to establish basic standards for restrained dogs, cities can take the matter into their own hands and pass ordinances to protect Texas dogs. To learn about passing a local ordinance in your area, read our blog post by Jamie Cantrell, Plano Animal Services Director, or reach out to Laura Donahue at [email protected].