Our Fight is Not Over: The Texas Legislature is Moving to Abolish Measures that Prevent Puppy Mills

Before 2011, it was all too common for the animal rescue community across Texas to have to step in and save large numbers of animals that had been seized by law enforcement because of cruel treatment they suffered while being used as non-stop puppy producers for unregulated puppy mills. Those seizures were just the tip of the iceberg – for every facility shut down, there were many more that continued to operate out of the public eye because there was no structure for oversight or inspections. And even after their animals were seized, Texas breeders profiting from puppy mills faced few repercussions. 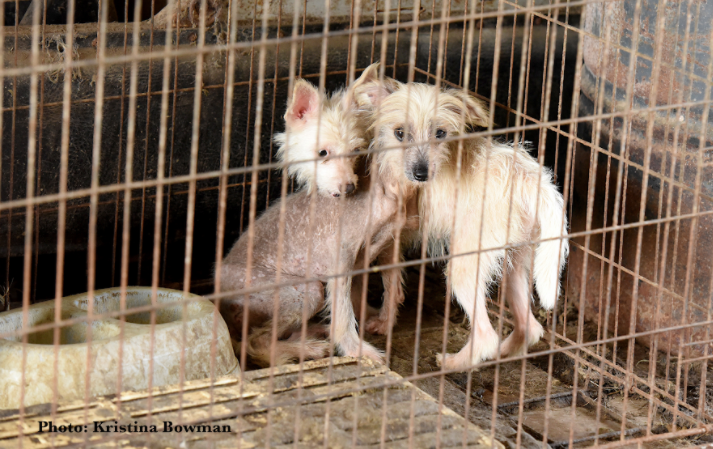 Because of the passage of the Dog and Cat Breeder Act in 2011, the Texas Department of Licensing and Regulation (TDLR) was able to inspect facilities and ensure they meet state standards. It was a big step forward for animals.

Now, after 10 years of tightening the reins on unregulated dog breeding, the Texas legislature is taking steps to free large-scale breeders from any regulations.

Let’s take a look at some of the worst cases before the Texas Licensed Breeders Program was enacted in 2011. Keep in mind that these reflect the average case, and these numbers only reflect the dogs that made it out alive. As you read, ask yourself this question: Texas, is this what we want to go back to?

Complaints had been growing against Maggic Pets/Heddins Kennels for nearly 10 years before law enforcement could build a case against the operation. Many of the dogs on the property had no water, some were missing legs, and several were found dead. Two elderly dogs were in horrible condition, one with a broken jaw who struggled to eat his kibble, and another with fur matted around infected eyes so that he could barely see. No charges were filed against the Heddins couple and the Humane Society of North Texas (HSNT) coordinated costly out-of-state transportation to find all the dogs homes and ease the burden on Montague County.

In the Mabank case, 550 dogs from “Klassy Kennels” were found panting in stacked wire cages without air conditioning to protect them from the August heat. They were filthy and infested with fleas, many sick, and in need of medical care. This was one of the largest puppy mill seizures in Texas history, costing approximately $150,000 for veterinary treatment and shelter care. Meanwhile, the breeder couple only paid $1,045 in fines and court fees. The owner said she is not a puppy mill and the whole thing was “half-truths or lies.”

Many of the dogs rescued from this puppy mill likely had not seen sunlight in years. They had been confined in filthy kennels covered in so much feces that rescuers had to wear gas masks. Dogs continued trying to breed even as the rescue was happening, and many suffered from mange and parasites. Fifteen dogs gave birth soon after rescue and another fifteen were expecting. Overall, the seizure and care of the animals cost the Houston Humane Society six figures while nurturing all of the animals back to health.

Over 200 border collies were found in varying stages of starvation, many with skin diseases and infections. While the breeding dogs were kept in cages, many dogs roamed the 25-acre property, which included an abandoned home littered with urine, feces, and garbage. The owner of the facility visited only on weekends and he faced two counts of animal cruelty but charges were later dropped. The Humane Society of Marion County paid for the seizure in which sheltering and veterinarian costs all but drained their entire budget.

Neighbors issued complaints about this breeder due to the smell of feces and constant barking from the 1,400 square foot Smith County home. The breeders, who sold their dogs at Canton First Mondays, insisted the dogs were healthy and expected to get them back. The SPCA of East Texas and SPCA of Texas, Inc. collaborated to provide the dogs with medical care for infections and parasites. Custody was awarded to the humane societies and the breeders were ordered to pay $8,000 in fines over the course of three years.

In a partnership between Animal Rescue Corp. and American Dog Rescue, 88 dogs were taken out of a run-down puppy mill in 100-degree weather. The dogs suffered from urine scalding on their legs, and many had feces matted to their fur. They were fed irregularly, and their water tubs were full of algae. Two dogs were dead, and one mom had given birth just days before. The rescue efforts relied heavily on volunteers and donations, but no animal cruelty charges were filed against the property owner.

Over 100 small breed dogs had been kept in a mobile home and outdoor enclosures, and they suffered from a range of maladies including parvovirus, malnutrition, and ear infections. The couple responsible was charged with a Class A Misdemeanor for cruelty to a non-livestock animal, typically amounting to less than $4,000 in fines, while the Humane Society of North Texas (HSNT) struggled to find space in an already-bursting shelter.

A massive burden was placed on Humane Tomorrow (formerly the Humane Society of Flower Mound), HSNT, and local law enforcement in Flower Mound to find homes for 51 Maltese dogs (and three puppies) and 41 Cavalier King spaniels found roaming rural roads. The likely speculation is that puppy mill operators unwilling to comply with the 2011 Breeders Program dumped their dogs to avoid charges.

While the Texas Licensed Breeders Program is not perfect, Texas cannot afford to lose the program entirely. Puppy mills significantly contribute to the abuse of animals in Texas. And the large-scale animal seizures, the kind that becomes necessary when breeders are completely unregulated, cost taxpayers a lot of money. Local law enforcement, district attorneys, and animal shelters must arrange the transportation, medical care, and rehoming of hundreds of animals at a time, and taxpayers often share these expenses. Keeping the Texas Dog & Cat Breeder Act means easing the burden on communities while protecting animals.

After 10 years of efforts to regulate breeders, the Texas Dog & Cat Breeder Act is facing a premature end. THLN and the animal advocates of Texas won’t let this disappear without a fight because of the power we believe this measure holds when wielded properly, to prevent animal cruelty in puppy mills.

To speak up for animals, sign our petition to keep the Texas Licensed Breeders Program and keep puppy mills out of Texas!