The Lone Star State Has Made Major Strides in Preventing Animal Cruelty.

“When I was a thoughtless boy, I took the life of a mother bird. I remember my father was greatly grieved and said, ‘Millard, do you realize what you have done? You have taken the life of a mother and have left her children to die of starvation in the nest. How would you like to have a great giant come along and kill your father and mother and leave you alone without food or care?‘ My father’s rebuke sank so deeply into my heart that since that day I never have taken the life of a living creature.”

In 1867, President Millard Fillmore had a big heart for animals and helped found a chapter of the newly formed American Society for Prevention of Cruelty to Animals. Fillmore led local meetings and used his prestige as a former president to initiate ordinances against mistreatment of local animals.

Over one-hundred and fifty years later, Texans are coming to the end of National Animal Cruelty Awareness Month. THLN, Texas-based and Texas-focused animal welfare organization, is also looking back on its legacy of improving animal cruelty laws in Texas since 1975.

In the eyes of the law, animals are generally viewed as property. Animals are bought and sold, used in various industries and have no individual rights. But they are protected by federal and state laws that have been enacted to protect animals from cruel and inhumane treatment. In Texas, THLN worked tirelessly for more than 45 years to pass laws that combat animal cruelty.

In the early 1990s, only five states had felony-level penalties for animal abuse and animal cruelty was only a misdemeanor in Texas. Then, in 2001, THLN met Loco. Loco was an eight-month old Texas pup stolen from his family's backyard and found days later, missing both eyes. Texas law at the time provided only misdemeanor charges with minor consequences. Loco’s terrible story highlighted how weak the Texas animal cruelty law was. As a result of THLN’s hard work to rally thousands of animal advocates across the state in support of stronger laws, animal cruelty has gone from a misdemeanor charge in 2001 to a crime worth two to ten years imprisonment and a possible fine of up to $10,000. For a more in-depth look at all of the amendments to the animal cruelty law THLN has helped pass in Texas, please click HERE. 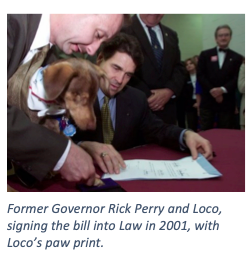 Today, Texas’s animal protection laws have earned it a spot as one of the top ten anti-animal cruelty states. From outlawing dog fighting to ensuring humane shelter standards, THLN works to make sure that horrible acts of animal cruelty are punished to the fullest extent.

Making progress to improve animal welfare requires concrete changes in the law. We have a long way to go to increase education and enforcement. THLN’s lengthy history of legislative experience have taught us that we can’t let perfection be the enemy of the good – it’s one step at a time, each step toward a more humane world.

THLN supporters have a shared belief that it is all of our responsibility to speak about the injustices we see for those animals who do not have a voice.

We invite you to join us in the fight to pass laws that improve the lives of animals by using your voice during the 2021 Texas legislative session.