Why we fight: Ryder's story

“His coat is faded, his ears burned from a life outside. He was found roaming with this chain and padlock around his neck. The chain, embedded into his neck. He was not a pet nor a family member. He was a prisoner.”

These are the words on Ryder’s intake chart that had summed up his first years of life. He was frail, skinny, and in pain.

“He’s filled out, his coat is shiny and thick. He trusts people again, and he’s a happy, healthy dog."

Those are the words his trainer Maurice Gassiott uses to describe him today. Maurice – Houston’s Dog Whisperer – spent 30 days with Ryder in the summer of 2017. Ryder’s mom still boards the German Shepherd at Maurice’s facility, Gray Wolf Canine Rehabilitation, when she goes out of town.

“He was just here a couple of weeks ago,” Maurice told THLN in late July. “When I met him he was so bony and anxious. He had leash aggression, basically barking and biting if he came across another dog.”

Maurice and his own rescue dogs taught Ryder how to run with the pack, literally.

“We took Ryder on walks, and you could see him looking at the other dogs for reassurance. He’d see my dogs ignoring other dogs and modeled that behavior,” Maurice said.

Despite his heartbreaking beginning, once Ryder was “allowed to just be a dog,” he’s exactly that.

According to Val’s Pals, which initially rescued Ryder, he was found wandering the streets, the chain and padlock embedded in his flesh, his chain dragging behind. “We will never know how Ryder escaped his horrific life,” they said. But there are many people who’ve been touched by Ryder’s story and are now sharing it. 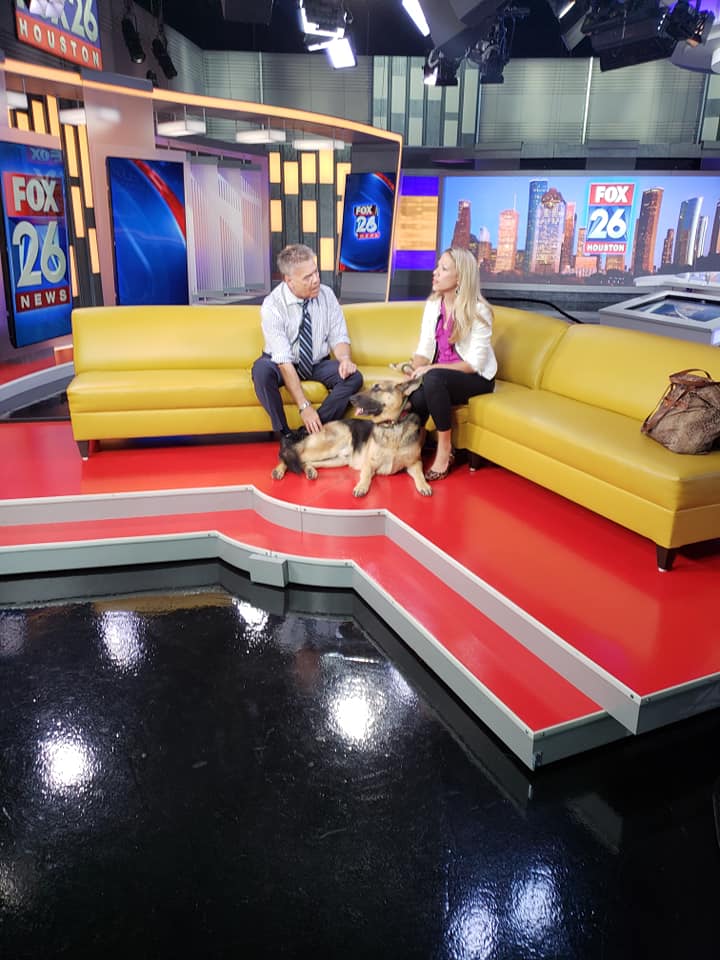 One of those people is THLN’s executive director Laura Donahue Halloran. Ryder recently joined her for an interview with a Houston TV station (stay tuned for future coverage)!

Ryder and dogs like him are the reason THLN is going back to the Texas Legislature in 2019. We will be working to pass our humane tethering legislation once and for all. We will not give up.

Will you join us?