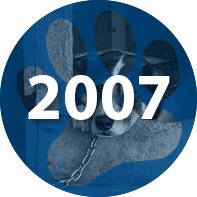 A New Law with a Fatal Flaw

Governor Rick Perry signed HB 1411, the “Unlawful Restraint of Dog” bill, requiring dog owners to restrain dogs with collars “constructed of nylon, leather, or similar material, specifically designed to be used for a dog” and tethers long enough to allow the dog to move about. The law didn’t affect municipalities that already had equivalent or stronger tethering ordinances. It applied only to unincorporated parts of counties not covered by city ordinances. In a state as big as Texas, that meant millions of dogs would be affected.

Moreover, the new law didn’t require dogs have drinkable water or access to shade and protective shelter, nor did it outlaw the use of chains. Worse yet, the Unlawful Restraint of Dog law had a fatal flaw: it required officers to give dog owners a 24-hour warning before taking any action. 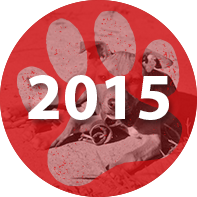 THLN Brings Stakeholders Together to Fix the Broken Law

After the law went into effect, THLN began receiving reports from animal control and law enforcement officers about the defects in the law. THLN brought these stakeholders together, veterinarians and animal welfare experts, to fix the broken law.

In 2015, THLN took the efforts of those stakeholders to the Texas Legislature in the form of the “Humane Tethering” bill, HB 2562. The bill aimed to fix the 2007 law and included a definition for adequate shelter, required drinkable water, struck the use of chains and removed the 24-hour warning period. Though HB 2562 had bipartisan support and 42 co-sponsors, it died in the Texas House due to a legislative maneuver to prevent bills from getting a vote. Dogs not protected by municipal tethering ordinances would have to wait two more years before the Texas state law could be fixed. 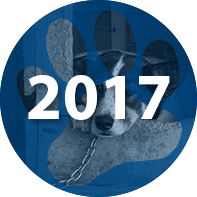 THLN Returns With the Adequate Shelter and Restraint bill
Undeterred, THLN returned to the Texas Capitol in 2017 with the "Adequate Shelter & Restraint" bill, HB 1156/SB 1090. At this point, ten years had passed since the original Unlawful Restraint of Dogs law was passed, and support for reforming the law had grown. While HB 1156/SB 1090 passed the Senate with a vote of 29 to 2, it died in the House due to a politically-motivated tactic known as a point of order. A point of order asserts House rules are being broken. In this case, opponents claimed the bill’s caption was misleading for not including the word “criminal.”

Why did the bill’s caption not include the word “criminal”? Wouldn’t criminal penalties apply to violators? Yes. The “Unlawful Restraint of Dog” law already has penalties that could lead to jail time, and HB 1156 bill did not add or alter those penalties. While the move was disingenuous, it was enough to kill the bill. Once again, Texas dogs would pay the price with their lives while waiting for the next legislative session. 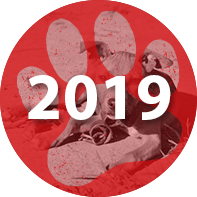 The bill was re-filed in 2019 as SB 295/HB 940 and again sailed through the Senate with a vote of 27 to 3. It then died by way of another point of order in the House. The legislator responsible claimed the exceptions listed that allowed tethering while hunting, ranching, or even while “stepping into a Starbucks” weren’t highlighted enough in the Bill Analysis, which is the memo summarizing the bill. No wording would have satisfied the lawmaker who insisted that ensuring dogs had basic protections was “government overreach”.

With more people than ever fired up in support of the bill, THLN focused interim efforts on continuing to build a coalition of support, while also helping to enact local ordinances around humane tethering to give dogs the help they needed without delay. 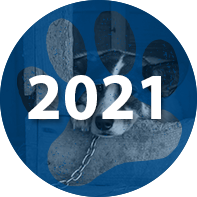 Safe Outdoor Dogs Passes Both Chambers, Again Stopped by a Single Elected Official
By the 87th Texas Legislative session, one thing was certain: THLN would leave no stone unturned to pass this vital legislation, now dubbed the “Safe Outdoor Dogs Act.” Support for reforming the broken 2007 law had also grown exponentially: statewide organizations in support now included the Texas Veterinary Medical Association, the Texas Young Republicans, the Texas Municipal League, and Houston Crime Stoppers. Outreach to freshman legislators had been fruitful in explaining that the “Safe Outdoor Dogs Act”(filed as SB 474 / HB 873) wasn’t new law but instead would simply fix the current broken law. Returning legislators already knew the bill had been killed for ideological reasons and were determined to get the bill over the finish line. One lawmaker even declared, “I don’t want to get any more photos of dead dogs in my district”.

One hundred Texas lawmakers co-sponsored SB 474 not only because it was a solid fix to a broken law, but also because it was one of those rare islands of neutrality and consensus in an otherwise divided legislature. The hard work of lawmakers over four consecutive legislative sessions produced a bill that passed the House 83-32 and the Senate 28-3 with wide bipartisan support. The THLN team was ecstatic when, on May 29, 2021, two days before the end of the session, the bill was sent to the Governor for signature.

However, at 11 PM on Friday, June 18, 2021, Governor Abbott vetoed the Safe Outdoor Dogs Act. Prior to this move, the THLN team was in constant contact with the Governor’s office, and never once were told he had concerns. The Governor’s veto proclamation of SB 474 ultimately meant that the bill would fail to pass for a fourth time, at the expense of dogs across Texas.

We will never give up on the dogs that live outside permanently. We can't do this without your support. Please consider making a donation to our efforts so we will be prepared and ready for the 2023 legislative session.