March 6 was a good election day for Texas animals!  Only two of our 23 endorsed candidates lost their re-elections, and early voting and election day totals blew away previous records in Texas. It’s safe to say our electorate is engaged. 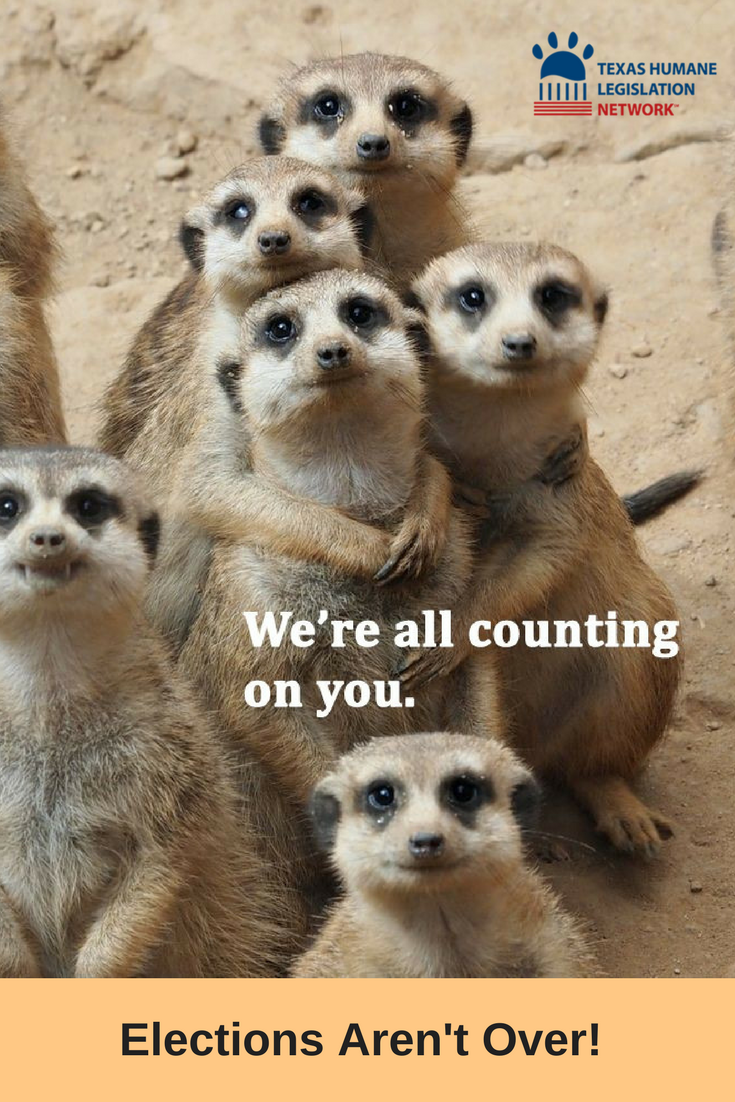 Democratic primaries saw record-breaking turnout. On the Republican side, far-right challengers picked-up one seat in the Texas
Senate and five seats in the Texas House of Representatives. Though 90 percent of Texas elections are usually decided in the primary, this year is different. A number of races were too close to call, spurring a total of 16 run-off elections in May. If you live in any of these districts, you’ll be called to vote again, and your vote will be even more critical this go ‘round!

First: Find out the result of your primary races here.

Due to the lack of a public voting record for non-incumbent challengers, THLN limited its endorsements to incumbents in the primary. However, 11 of the 16 run-offs in May involve open seats. If you live in any of these districts it’s important you reach out to the candidates and ask them where they stand on animal issues that matter to you, including better standards of care for tethered dogs living outdoors!

Second: Get to know the new guys and gals.

If your candidate won their primary outright with no run-off, odds are that those will be the representatives who will win in November. You have 9 months while these newcomers are at home, in your districts, before they head to Austin. Now is the time to meet with them and find out where they stand on animal protection!

For those of you with incumbent representatives endorsed by THLN, send them a note before they’re back in Austin for legislative session. Thank them for their humane voting record! (Don’t forget that all voting records for incumbents can be viewed on our website here.)

You can provide critical help in advancing a more humane Texas by becoming a monthly donor to THLN.

Through our new Fierce 500 campaign, we hope to recruit 500 advocates in our great state to give $15 a month to fund our off-session advocacy efforts.

While nearly all our work is powered by grassroots volunteers, we are entirely dependent upon individual donations to fund our legislative campaign. Recurring, monthly donations are one of the most impactful ways to give – and you don’t have to give more than a few bucks a month to make a tremendous difference.

All monthly donors who sign up in March will be the first members of our Fierce 500 campaign and will be entered into a drawing for a free ticket to our annual soiree. (We promise it will be as fabulous and fierce as all of our supporters.)

Thank you advocates for all you do!