But animal advocates say it doesn’t fully reveal the real dangers and cruel conditions of the exotic animal industry in Texas. 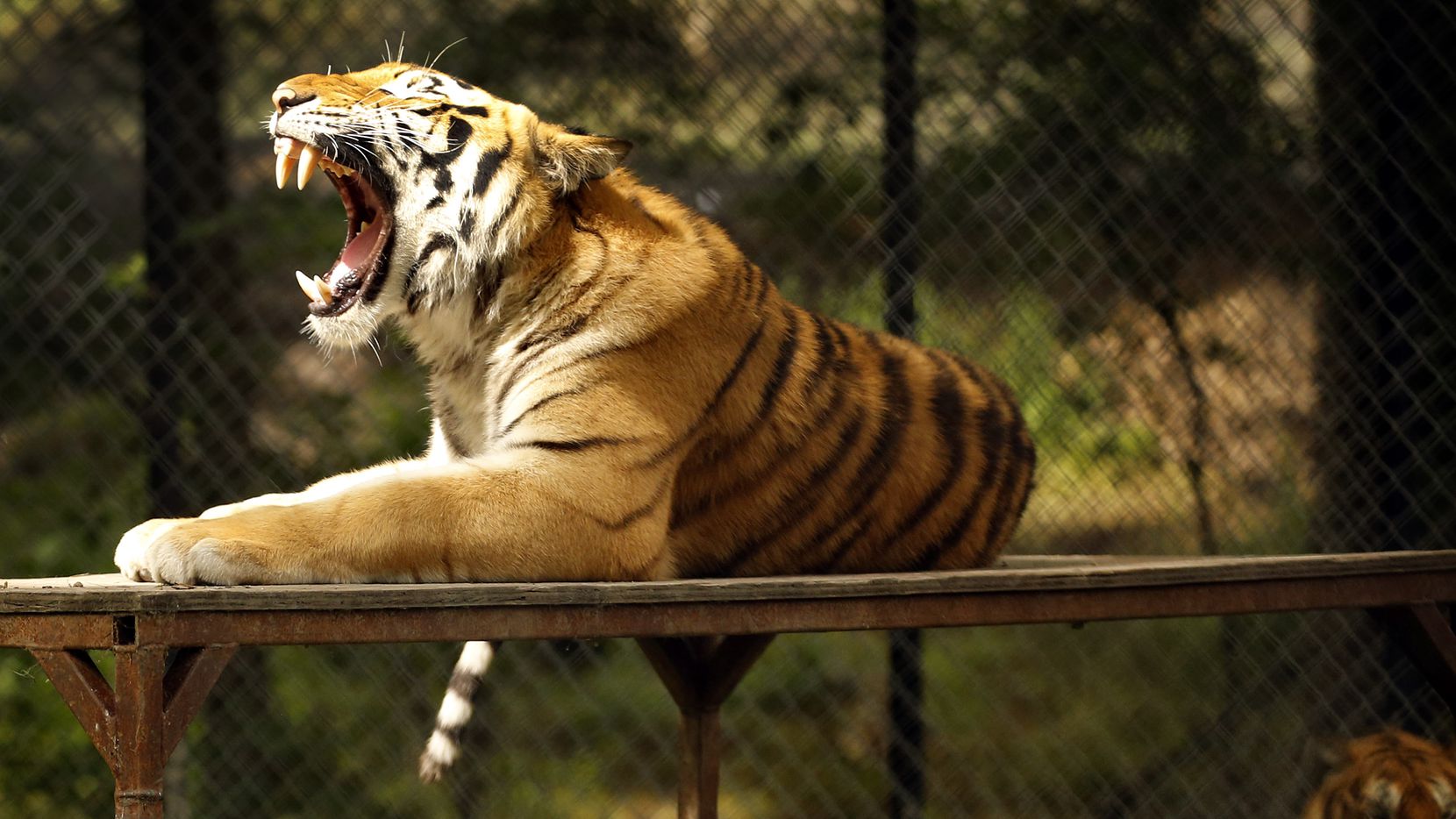 Anakin (top), a tiger at In-Sync Exotics in Wylie, Texas, yawns as he naps in the sun, Friday, May 15, 2020. Kenobi is pictured below. The big cat sanctuary is set to open Saturday with COVID-19 practices of keeping safe will be in place. hey will be open on weekends. (Tom Fox/The Dallas Morning News)(Tom Fox / Staff Photographer).

Corey Allison looked in the eyes of the scared lion and he felt his heart break.

He stared in disbelief at the tiny enclosure where the lion lived, a space behind a shooting range too small to be cleaned. He couldn’t wait to bring the animal to a large enclosure — to freedom and entertainment. Allison is just one of a handful of keepers in Texas who rescues exotic animals from owners who couldn’t care for them.

For people like him, every day with exotic animals isn’t like an episode of the Netflix documentary Tiger King. The buying and selling of big cats often lead sanctuary workers like Allison to rehome animals when owners find they’ve bitten off more than they can chew.

After Tiger King brought to light the exotic animal industry, a reader asked us to confirm a claim made by businessman James Garretson in the documentary. Garretson said he was able to purchase a pet lion through an ad in The Dallas Morning News. The reader wanted to know if this claim was true and what the ad said.

Curious Texas and the archives team researched to find advertisements for the sale of exotic animals. We couldn’t confirm the exact ad mentioned by Garretson as they were common sightings in this newspaper in the 1970s.

Outside of newspapers however, buyers and sellers today have found a way to keep the industry alive: through online platforms.

“There is a very active and open exotic pet trade that sells exotic animals, even big cats, via websites, social media groups, in-person auctions and catalogs,” said Jamie Reed, Board Vice President at the Center for Animal Research and Education. 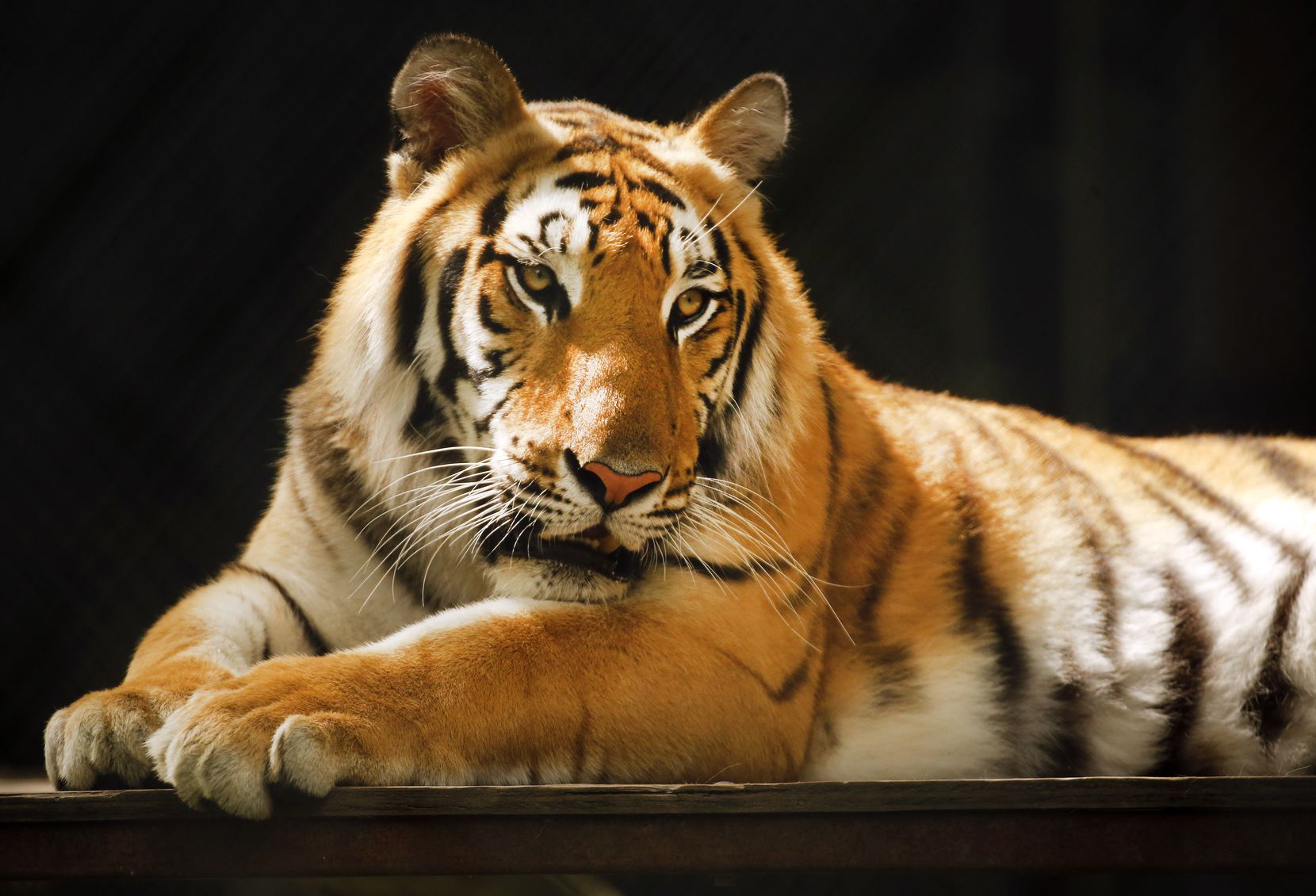 Websites like Wildanimalpets.com and Exoticanimalsforsale.net have pages full of pictures that feature big cat cubs for sale all over the United States. Much like a classified ad, sellers link their email and phone number below a short description of the animal and their price.

But websites specific to buying wild animals are not the only way someone can purchase an exotic animal.

An exotic animal owner, Vivian Tsao, from Houston said that the majority of advertisements she sees for exotic pets are on different social media platforms.

“A lot of my animals are rescues that I get off of Craigslist, or in other situations, they are passed on to me,” Tsao said.

Not only are experts unable to say how many big cats reside in Texas, but most are also unable to pinpoint where owners are purchasing them in the first place.

Jeremy Vargo, the executive director at International Exotic Animal Sanctuary in Boyd, says that his sanctuary has many big cats that were confiscated from people who kept them illegally, but he didn’t know how the individuals purchased the animals. 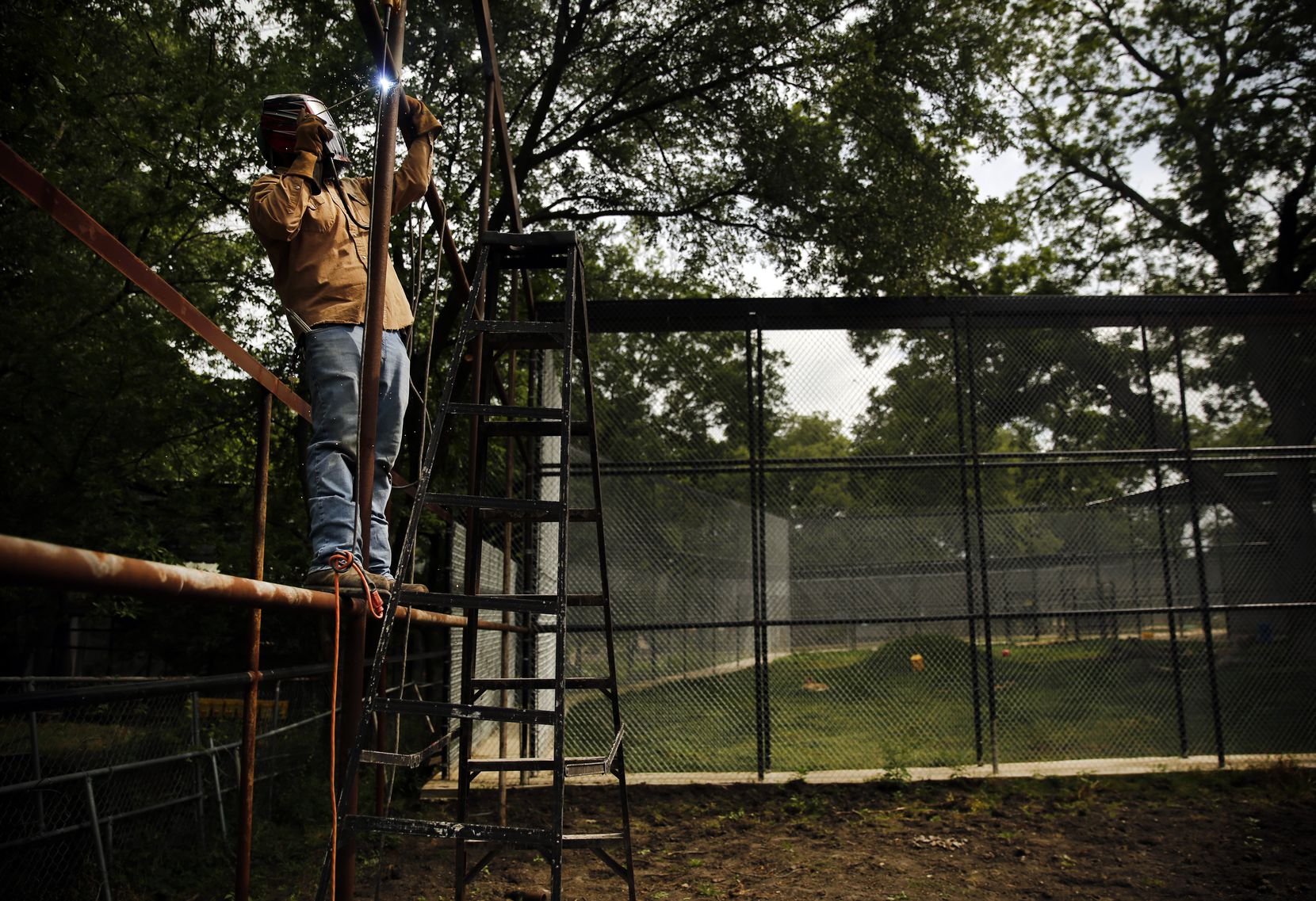 The act requires the owner to register the animal with local animal control authorities. After doing so, they must send a copy of the registration certificate to the Texas Department of State Health Services.

Bobosky said that the act placed some much-needed regulations on owners who were getting injured.

More children have been killed or injured by captive big cats in Texas than any other state, including a 3-year-old boy and 10-year-old girl who were both killed by pet tigers , the Texas Humane Legislation Network’s website notes. The website also details a 4-year-old boy who lost his arm, and another 4-year-old who had to undergo plastic surgery after being mauled by big cats.

Bobosky knows that for every big cat that lives in Texas legally, that many more likely live under the radar.

“Texas has always been a hot spot in the robust market for the animals and there are more tigers in captivity than in the wild,” she said. “But if they’re hidden and they’re not being registered, we’ll never know how many tigers are kept here in Texas.” 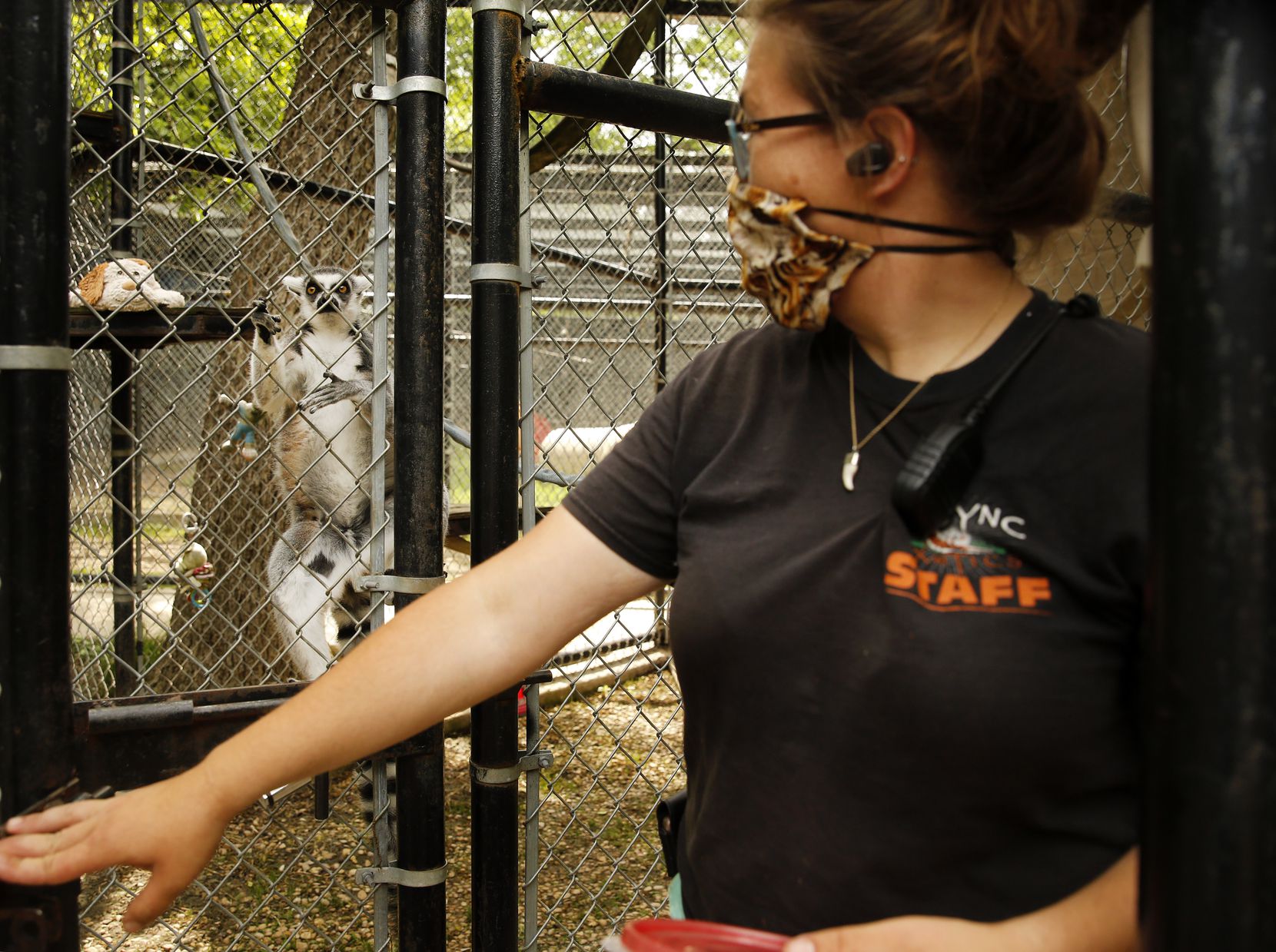 A ring-tailed lemur watches as curator Andrea Torina leaves the enclosure after feeding them at In-Sync Exotics in Wylie, Texas on May 15, 2020. (Tom Fox/The Dallas Morning News)(Tom Fox / Staff Photographer)

Owners of animal sanctuaries in Texas say that just because people can legally own exotic animals as pets doesn’t mean they should.

Angela Culver of In-Sync Exotics, a big cat sanctuary that is home to 75 cats in Wylie, received a call from a father in West Texas who had a 3-month-old tiger cub living in his home. The man had small children who had seen The Lion King and told their father that they wanted their very own Simba.

The man bought his children a tiger cub to keep as their new pet.

“Pretty quickly, it became apparent that this lion cub was not a good idea for two small children, so he contacted us,” Culver said.

Culver rescued the cub, now named Lambert, who lives at In-Sync Exotics under her care. Sanctuary workers like Corey Allison of PrideRock Refuge agree that under no conditions is it okay to keep big cats as pets.

“The species should not even be here in the United States,” Allison said.

Allison rescued big cats from a man in Texas who kept a lion and a hyena in his backyard behind a shooting range. The animals were separated by a small metal wall, kept in tiny enclosures made out of street plates, leaned against, and tied to each other.

The enclosures were so small, that there was no way to clean them, and eventually, the pens became a big mud hole.

“The worst part about it is that these enclosures were located on the backside of the shooting range,” Allison said. “These animals had to live pretty much their entire lives with people cracking shots in their direction. I mean, it’s heartbreaking.”

After the man passed away, Allison and his team received a call, and they went to the site to rescue the cats from the man’s backyard.

“It is rewarding when you get to see an animal that has been sad for years and then it gets to come out and get out of its shell,” Allison said.

Allison spends his days caring for lions and tigers at PrideRock. Although Allison has rescued animals from all over the country, he could not deny Texas’ reputation for being a hot spot for trade and private ownership of big cats.

“A couple of years ago, we got a call about a young tiger that was in Conroe, Texas, that had been wandering the streets,” Vargo said, “She had a collar and leash, and some people that were driving down the road saw her walking down the sidewalk.”

A surprised group of animal control officers responded to the call and were able to safely capture the young tiger.

“We were able to go and work with the animal control officers and the police and help them through the process. That’s not something they were familiar with,” Vargo said.

The tiger was soon named Nala, and she found her forever home at International Exotic Animal Sanctuary. 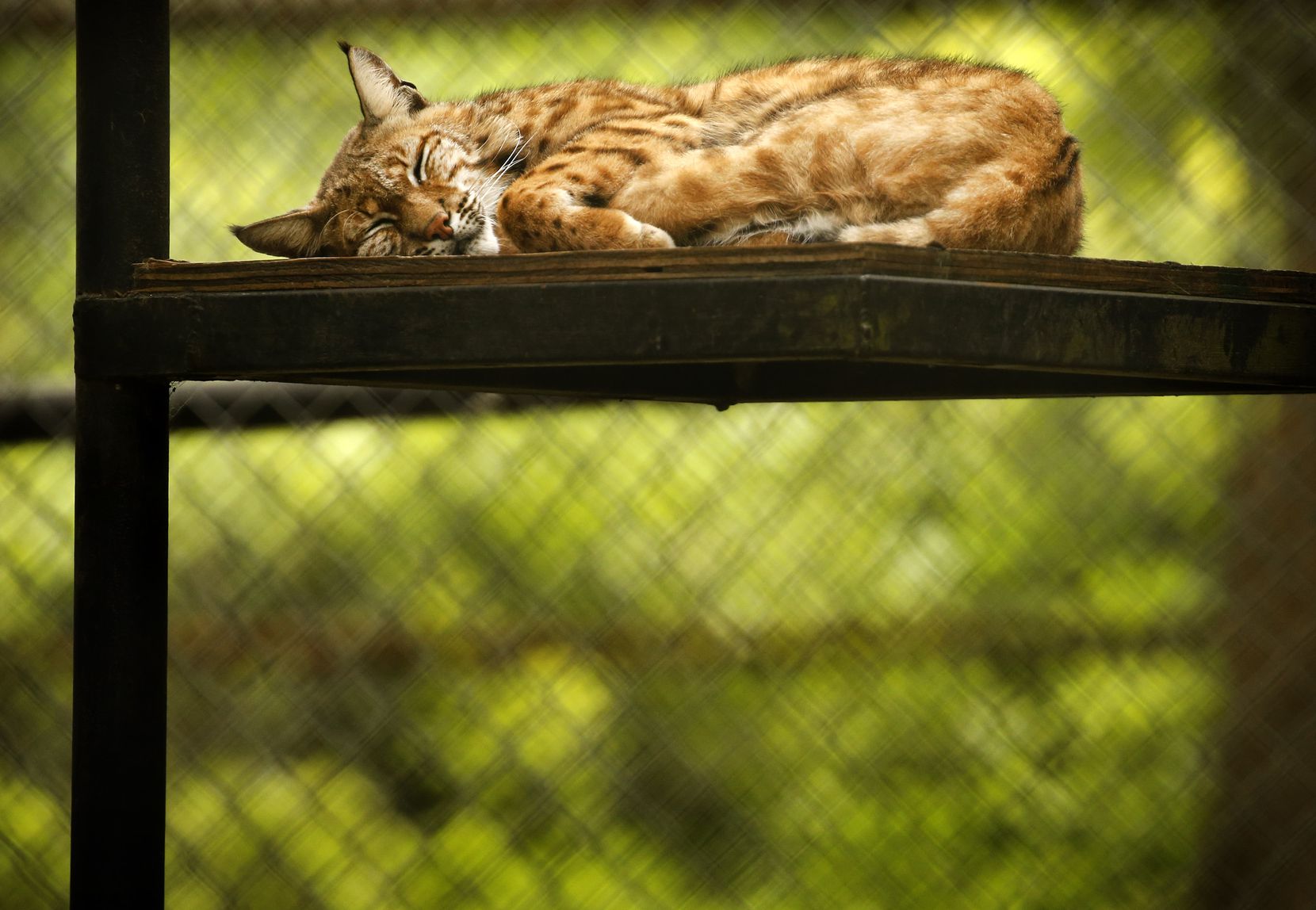 Although Nala’s story has a happy ending, a sobering amount of wild animals that are privately owned are not as fortunate.

Terry Thompson, a resident of Zanesville, Ohio, had been keeping his own private animal park. Thompson snapped on a Wednesday in 2011 and released all of the animals from their enclosures before he killed himself. In the end, 48 out of 56 of the animals released were killed.

“And what are authorities gonna do if they can’t easily capture it?” Culver of In-Sync Exotics said. “They’re gonna shoot. It was pretty tragic. That’s another reason why it’s a bad idea for private ownership because it’s not what if this happens, but when it happens.”

Not only is the life of the owner at risk, but big cat advocates say that it’s unfair for the animals as well.

“Tigers are majestic and beautiful in the wild, and to keep a tiger in a cage for the rest of its life is incredibly inhumane,” Bobosky of Texas Humane Legislation Network said.

While Tiger King popularized the exotic animal industry, the Humane Legislation Network claims the series didn’t show “the inhumane conditions many caged tigers live in,” such as unhealthy diets and lack of appropriate vet care.

“What a shame it had a chance to educate, and it did not,” Bobosky said. “And it didn’t show that this whole business is based on commercial cruelty.”