An entire community came together in Weatherford earlier this month to find a dog that fled the scene of a car. A pick-up truck driven by Marine Corps Major Andrew Butler was struck on March 2, and a five-year-old Australian shepherd named Cody escaped from his harness. Dozens of volunteers came together to help locate the missing dog, who was sadly found dead along the railroad tracks a few days after disappearing. Major Butler had been traveling from San Diego, relocating to his new home base in North Carolina.

He returned to Weatherford after settling his family in North Carolina, and his dedication to finding Cody got the attention of Sheriff Larry Fowler, the Weatherford Fire Department, and local volunteers. 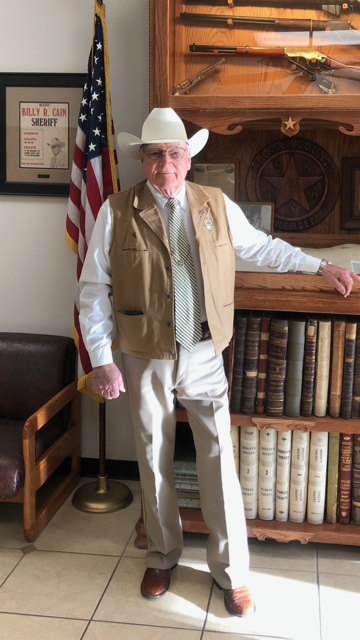 Sheriff Fowler has long had a reputation for taking care of their animals and fighting animal cruelty. In 2010 his office disbanded a cockfighting ring resulting in the seizure of 118 birds and nearly 200 arrests. In 2014, Fowler oversaw an animal cruelty investigation where a mother dog had been shot and her newborn puppies had been abandoned on the side of the road. Within 72 hours, the case resulted in an animal cruelty arrest stemming from the investigation.

THLN spoke with Sheriff Fowler about his office's most recent act of compassion. Sheriff Fowler said he took particular interest in Major Butler’s case because of his dedication to finding his beloved dog.

"Anybody that would go all the way to the east coast and come back to look for their pet, well, I decided I was going to do everything I could to help this man," Fowler said.

In an official press release, he saluted Major Butler for his service to our country. Sheriff Fowler said his department "pulled out all the stops" to help the Major, including the local media, helicopters, department vehicles, the loud speaker -- anything available to them.

Sheriff Fowler acknowledged that it takes a dedicated community and law enforcement to make animal welfare a priority. But the work of local cities and counties to make Texas a more animal-friendly state would be easier if the Legislature also made the passage of humane laws a priority.

"The Legislature needs to take extra steps to pass and enforce animal welfare laws," he said. "It's up to all of us."