How to Build a Community Link Taskforce: Tips From the Experts

“Just because we’re the big city of Houston doesn’t mean you can’t do this as well in your smaller town,” Assistant District Attorney Jessica Milligan, chief of the DA’s animal cruelty section, told participants at the recent Texas Unites for Animals conference. “All you need are the communications and the connections. Reaching out to other agencies, learning what resources they have, and telling them what you have makes things happen,” she said. “A task force is like a ‘field of dreams.’ If you build it, they will come.” 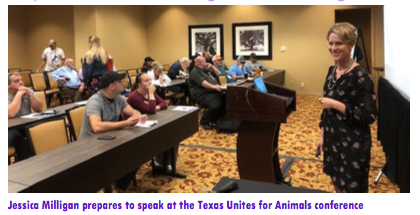 The multi-agency Harris County Animal Cruelty Taskforce – which pioneered the concept of a streamlined centralized hotline for reporting animal abuse in the sprawling metropolitan areas around Houston, Texas (See the March 2018 LINK-Letter) that has resulted in a 200% increase in animal cruelty arrests (See the April 2019 LINK-Letter) is offering tips to other communities on how to launch their own interdisciplinary programs.

Milligan offered suggestions based on how they launched their program in the nation’s 4th-largest city: