"Horror Show": The case of trophy hunters and elephants

The time to act is NOW. Tell President Donald Trump and Secretary of the Interior Ryan Zinke to keep the ban on importing elephant trophies from Zimbabwe and Zambia.

Earlier this week, the Trump administration announced it would reverse an Obama-era ban on the importation of trophies from elephants killed in Zimbabwe and Zambia, allowing American hunters to once again bring ivory and body parts of the elephants they pay hefty sums of money to kill back to the United States. In response to immense public outcry after this announcement, President Trump Tweeted he would halt the decision until further review, calling the act of trophy hunting a "horror show" and saying to expect a final decision by next week.

With only approximately 350,000 elephants remaining in the wild (there were 10 million in the early 1900s), the future of 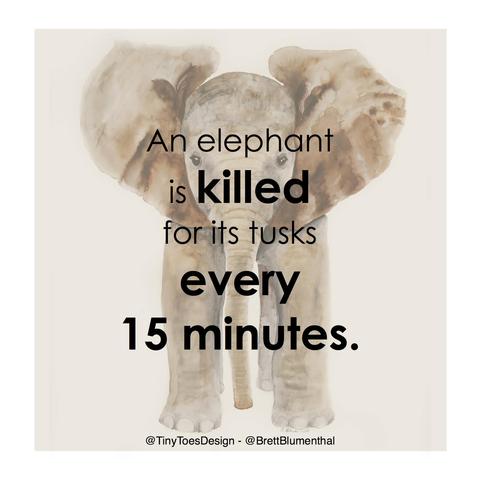 elephants has never been more dire. One is killed every 15 minutes by poachers to feed to the global demand for ivory (the United States is the world's second largest consumer of ivory, after only China).

In one incident in 2012, poachers killed several hundred elephants in Cameroon using AK-47s and grenades. Weigh in habitat loss and humans-wildlife conflict and the species could be extinct within our lifetimes.

Reasons to support the ban?

-With America's adoption of a near-total ban on the ivory trade in 2016, the ban on importing elephant trophies reinforces America's position on a world-scale that elephants are worth more alive. They are not just trophies to be hung on a wall.

-Conservationists on the ground maintain that very little money paid to hunt and kill elephants is actually used for conservation. Instead, the safari companies that organize the elephant kills have their own staff, meaning little of the money goes back into the economy.

-Elephants are highly intelligent creatures who are capable of complex thought and deep feeling. They express joy, anger, grief, compassion and love. They mourn their dead. The David Sheldrick Wildlife Trust, which raises elephants orphaned due to poaching, has even seen signs of post-traumatic stress in a baby elephant that comes into their care after witnessing its mother poached.

-With the species in decline and facing extinction within our lifetime (only 350,000 remain in the wild and one is already poached every 15 minutes for its ivory), every effort must be taken to protect those animals that remain.

What can you do?

-Contact Secretary of the Interior, Ryan Zinke, imploring him to take a stand against reversing the ban because of the reasons listed above. Emphasize your disappointment and show that citizens do not support any changes. Send your email to: [email protected], and also submit it via the form at http so://www.doi.gov/contact-us with the suggested subject line "Elephants need your help."

-Contact the US Fish and Wildlife Service to explain why reversing the ban is bad news for elephants (for the reasons listed above) with the suggested subject line "FAO Principal Deputy Director Sheehan - Elephants need your help." Send your email to [email protected] (Assistant Chief, Office of Public Affairs) and [email protected] (Public Affairs Specialist).

-Call the White House directly at 202-456-1414 and let President Trump know you do not support a lift of the ban on the importation of elephant trophies from Zambia and Zimbabwe. You may outline the reasons listed above as well.

Thank you for being their voice! Please send any responses you receive to [email protected]