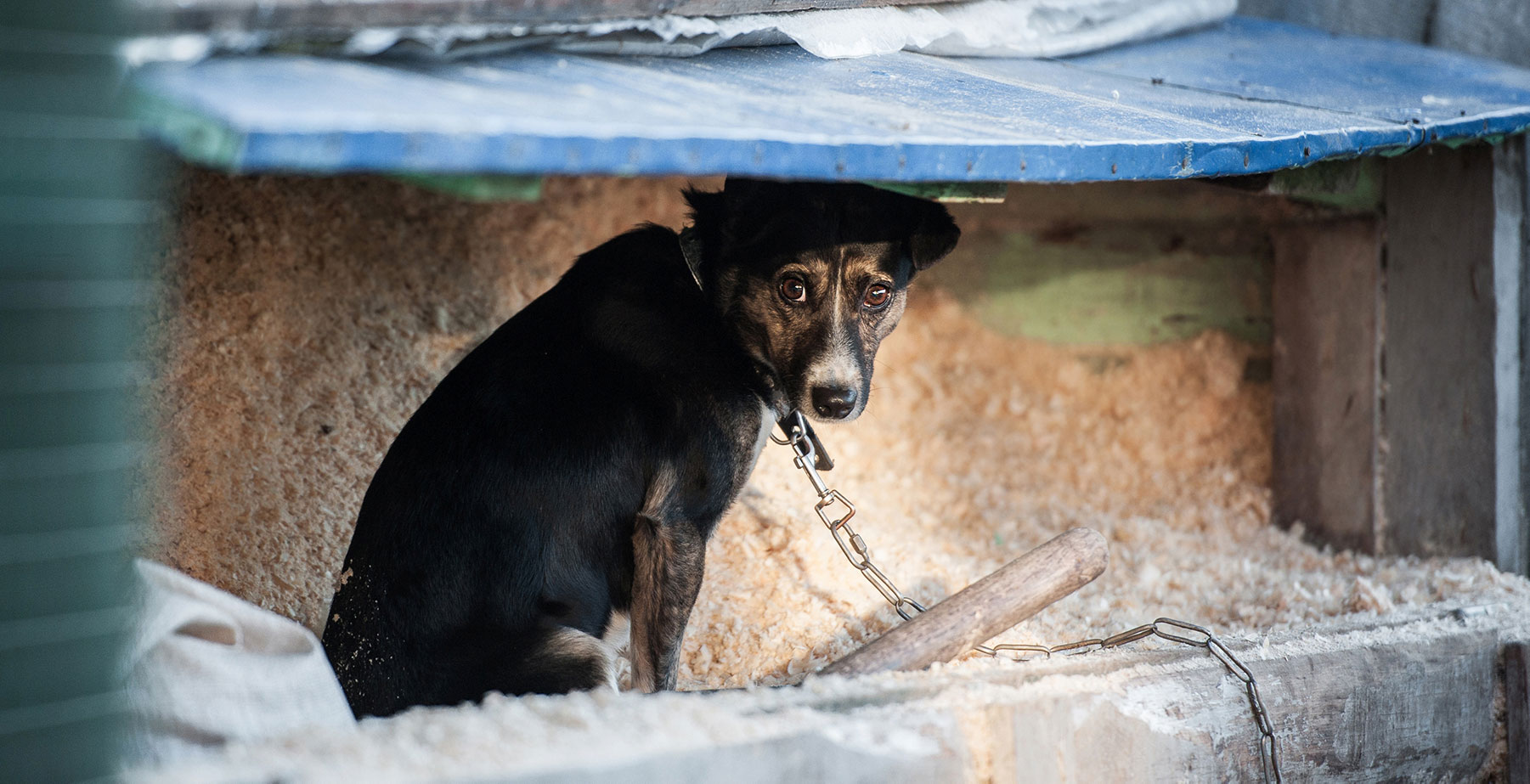 THE ISSUE: Texas is a hot spot for the private possession, breeding, and trafficking of big cats. In Texas, there is no statewide ban on the private ownership of big cats and it is perfectly legal to own one in certain counties. The problems flowing from private possession are myriad, including the threat to public safety when big cats escape their enclosures, a lack of information about the number of big cats and where they are located, and the incessant breeding and inbreeding of big cats for commercial uses.

It is expensive to properly feed and care for a big cat. Big cats in private ownership rarely receive proper nutrition, adequate space and enrichment, or veterinarian care. When the cubs used in cub petting operations outgrow their usefulness to operators at 12 weeks, they may be sold to wildlife traffickers, destroyed or dismembered for parts. Even when privately owned big cats are fortunate enough to be released to legitimate sanctuaries, they often suffer life-long bad health from earlier neglect and malnutrition.

SOLUTION: H.R. 263 – The Big Cat Public Safety Act – prohibits the private possession of lions, tigers, leopards, cheetahs, jaguars, cougars, or any hybrid of these species. The bill also prohibits public contact with those animals. Prohibiting public contact would improve public safety in real-time by preventing injuries and deaths from encounters with big cats. Prohibiting public contact would also end cruel cub petting operations which rely on the constant breeding – and inbreeding – of captive big cats. At three months old, when the cubs are no longer useful, operators sell or dispose of them. Thus, these operations continually increase the number of big cats in private ownership, perpetuate animal suffering, and exacerbate the threat to public safety. While H.R. 263 is federal legislation that would apply equally across the states, it’s important to understand the outsized role Texas plays in perpetuating problems stemming from private ownership.  Of the approximately 10,000-20,000 big cats currently in private ownership in the U.S., an estimated 3,000-5,000 are in Texas. Those numbers are best estimates because no one really knows for certain how many big cats are in Texas.

Consider that in a 3-month span – from February to May 2021 – no fewer than four privately-owned tigers escaped from homes in San Antonio and Houston. During that same timeframe, a 13-week old tiger cub and a bobcat were confiscated from a San Antonio couple. Outside of Texas, some states ban private ownership altogether, some regulate in part, and others have no regulation at all. In short, this regulatory patchwork fails to protect public safety and big cats. The problem requires a federal solution and the time to do it is NOW.

The Puppy Protection Act, filed May 19, 2021, would significantly reform standards of care for USDA licensed dog breeders by increasing enclosure sizes, requiring solid flooring, and eliminating stacked cages. The Act also requires protection against extreme temperatures and prompt, professional veterinary care for sick and injured dogs. Quality of life for dogs in those facilities would improve significantly because the Act specifies twice a day feeding, exercise and socialization. It also imposes breeding limits for female dogs, and requires breeders to humanely rehome retired dogs (instead of auctioning or destroying them). Sweeping as these reforms may be, they are but part of a multi-pronged approach needed to fight puppy mill cruelty. Continue reading below to see how changes to the Texas state laws govern the treatment and sales of commercially bred dogs in Texas.

The SAFE Act has been reintroduced into the 117th Congress. H.R. 3355 would prohibit the slaughter of horses for human consumption in the United States, as well as the shipping and export of horses (or other equines) for the same purpose. Horses are routinely given substances dangerous to humans, and the export of US horses for human consumption poses a serious public health risk. Currently, US horses - particularly spent race horses - are shipped cross-country to Mexico and Canada to be slaughtered for human consumption. The meat from these animals is often sold without proper identification, so consumers unwittingly ingest banned substances, risking their health. Additionally, both the transporting and slaughtering of horses is notoriously inhumane. Horses packed into semi-trailers for shipment hundreds and hundreds of miles suffer dehydration, injuries and even death. Upon arrival, they face a tortuous dismemberment in facilities routinely cited for cruelty violations.

The Horse Transportation Safety Act of 2021 was introduced to the 117th US Congress in February 2021, and passed out of the House Transportation and Infrastructure Committee on June 10, 2021. The purpose of the HTSA is to protect both horses and motorists by prohibiting the interstate transport of horses in double-decker trailers. In 2007, when a double-decker trailer carrying 59 Belgian draft horses overturned in Wadsworth, Illinois, 19 of the horses died. The HTSA would also bring consistency to federal law governing horse transport. In 2011, the use of double-decker trailers to transport equines to slaughter was banned, citing concerns that such vehicles could prove "extremely top-heavy and prone to tipping." Thus, the HTSA would close the loophole that currently allows horses not bound for slaughter to be unsafely packed into double-decker trailers.

THE ISSUE: The Texas Department of Licensing and Regulation (TDLR) created the Licensed Breeders Program (LBP) in 2011 to ensure large-scale commercial dog and cat breeding facilities meet basic standards of care. While the LBP has been successful at preventing animal cruelty through inspections and enforcement, it needs improvement to better oversee the industry it was designed to regulate.

SOLUTION: The Texas Legislature needs to strengthen the LBP and revise the criteria which trigger the licensing requirement. Currently, only breeders with 11 or more breeding females who sell twenty puppies or kittens in a calendar year must be licensed. The two-factor criteria used by LBP has an extremely high threshold and prevents TDLR from regulating the majority of large-scale commercial breeders in Texas.  Further, proving the sale of at least 20 animals in a calendar year is nearly impossible. Pet sales are often cash transactions, and TDLR inspectors reported consistently encountering breeders who side-step record-keeping requirements. THLN's position is that lowering the number of breeding females from 11 to 5 and removing the sales requirement will:

These reforms will in turn allow TDLR to do a better job protecting the animals in breeding facilities.

THE ISSUE: Current Texas state law does not adequately protect consumers, puppies or kittens from pet stores selling commercially bred animals with undisclosed health defects. Purchasing a sick or defective pet burdens the buyer with veterinary costs and in some cases, the animals are so compromised they die or have to be euthanized. In recent years, the THLN hotline has received 500+ complaints from consumers who have purchased sick/defective puppies. The Texas Veterinary Medical Association and Attorney General have also received hundreds upon hundreds of complaints from Texans who purchased compromised animals from pet stores.

In addition to selling sick and defective animals, the industry engages in predatory lending practices that have been compared to payday loans: exorbitantly high interest rates, balloon payments, and "repo-ing" the pet if a buyer misses a payment. Because Texas currently does not have a “puppy lemon law” buyers do not have options for a refund, exchange, or reimbursement of vet bills should they purchase a sick/defective animal. Their only recourse is to sue. Most often this path is not taken because it is not economical to pay attorney’s fees in anticipation of receiving little to no damages through litigation.

Pet stores that sell commercially bred puppies rely almost entirely on puppies sourced from large-scale breeding facilities in the midwest. Those puppies are highly vulnerable to disease, and cross-contamination is exacerbated when puppies are drawn from several facilities and packed tightly into “puppy distributor” vans and shipped hundreds of miles to Texas. Puppies who may have been healthy before shipment often arrive sick, weak, and dehydrated. Texans buying puppies from these sources unwittingly expose themselves to illnesses such as giardia and antibiotic-resistant campylobacter, a bacterial infection that can be deadly. An investigation by the Centers for Disease Control and Prevention recently linked more than 100 human cases of campylobacter infections to puppies in retail pet stores. Against this backdrop, Texas ranks No. 2 in the country for euthanizing pets. Nearly 97,000 pets were euthanized in Texas in 2019. While tax-payer-supported animal shelters and nonprofit organizations struggle heroically to shelter, vaccinate, sterilize, and rehome as many pets as possible, out-of-state puppy millers profit through retail sales of their defective “product”.

SOLUTION: The Texas Legislature needs to require retail pet stores to source the cats and dogs they sell from animal control agencies, shelters, and rescue groups. Several Texas cities have already switched to this humane model, including Austin, El Paso, The Colony, Euless, San Antonio, and Waco. Their experience sourcing pets from shelters and rescues avoids the consumer protection and health issues detailed above and increases opportunities for homeless pets to be matched with new families. It is the obvious current policy governing the sales of commercially bred pets in Texas is insufficient to protect consumers from the bad business practices relied upon by retail pet stores. It is equally obvious there is significant interest in the issue as demonstrated by legislation filed in the 87th Texas Legislative Session (see HB 1818).

SOLUTION: The Texas Legislature needs to require sellers to provide a bill of sale for each animal sold by a breeder.

Requiring TDLR Licensed Breeders to provide a bill of sale is another way to better protect pets and the people buying them. LBP license holders are not currently required to provide a bill of sale to buyers. As mentioned above, TDLR reported that numerous commercial breeders simply sidestep record keeping. Failure to keep records of sales not only allows bad actors to evade inspections and ignore standards of care – but it also means they can avoid paying sales tax on the dogs and cats they sell. Bear in mind that commercial breeders sell the animals they breed for many hundreds, sometimes thousands, of dollars. When breeders sell animals at those prices and don’t report their sales, a significant amount of tax revenue goes uncollected because there is no paper trail. A bill of sale from the breeder for each sale or exchange of a dog or cat will bolster TDLR’s ability to regulate breeders who currently qualify for licensing but evade regulation, and improve the state comptroller’s ability to collect sales tax on sales of commercially bred pets.  Lastly, the bill of sale will help hold breeders accountable to the public. When pet sales are not recorded, buyers who purchase sick or defective animals have no way to prove where they obtained the animal. A bill of sale that lists the name of the breeder and buyer, a description of the animal sold, and the amount paid will help protect buyers from unscrupulous breeders selling compromised animals.